It has been one year and seven months since China enforced its strict National Sword Policy, which led to the importation ban on 24 categories of solid waste and restricted the contamination acceptance thresholds of recyclables to a seemingly impossible-to-achieve 0.5 per cent.

Previously, China was the largest importer of post-consumer recyclables, importing as much as 60 per cent of recovered paper and used plastics from G7 countries during the first half of 2017. This number dropped to less than 10 per cent during the same period a year later.

China’s motivation for the ban and these more stringent contamination standards, is to minimise environmental degradation, reduce impacts on public health and safety, and to no longer be the world’s dumping ground. It is also believed that China intends to consolidate its own recycling facilities into larger, cleaner and better-regulated facilities - known as ‘Eco Parks’- and to strengthen its onshore markets.

Initially, China’s National Sword Policy was expected to disrupt the export of more than 619,000 tonnes of recyclable waste out of Australia per year. However, a year later, this figure has doubled to 1.25 million tonnes.

Prior to the ban, Australian recycling companies collected, sorted and exported 99 per cent of the country’s recyclables to China for further processing and conversion to reusable raw materials, which Australia would then buyback. Following the ban, Australia and many other developed countries have been forced to look for new customers for their contaminated recyclables, shipping them to South-East Asian nations, including Malaysia, Vietnam, India, Thailand and Indonesia. Although these developing countries initially had less severe controls and fewer import regulations, they have recently followed in China’s footsteps by introducing new restrictions and have begun sending back the plastic scrap to the country of origin, with Malaysia implementing a ban on plastic waste in October 2018.

With a dwindling overseas market for recyclables, many of Australia’s recycling companies resorted to short term solutions, such as stockpiling recyclables within large warehouses or sending them straight to landfill. The large stockpiles pose a major safety hazard, with combustible waste materials causing warehouse fires throughout the country since the ban. One recycling plant in Coolaroo was the site of a major fire in mid-2017. This resulted in more than 100 homes being evacuated, and the fire continued to burn for more than 10 days.

To address the unfolding waste crisis, Australian State, Territory and Federal Environment Ministers met in late 2018 and agreed to develop an Action Plan for implementing a new National Waste Policy. This policy, which centres around the idea of a circular economy, would require a $150 million investment from State and Federal Governments. A circular economy, a concept promoted by the Ellen MacArthur Foundation, involves moving towards an economic system that reduces waste. Instead of exporting valuable recyclables to developing countries, the materials can be recovered and regenerated onshore. This would create new green industries, create up to 9.2 jobs for every 10,000 tonnes of material recycled, reduce the cost of importing virgin materials and minimise environmental degradation caused by resource extraction and pollution.

While the Environment Ministers agreed that the concept of a circular economy is the way forward, they did not commit to any funding targets.

A primary concern is that there is a lack of demand for these recycled materials, and it is, therefore, difficult to grow onshore markets. In Victoria, the Andrews Government has sought advice from Infrastructure Victoria on how to address these challenges. Infrastructure Victoria will investigate ways to grow a thriving onshore recycling market that will reduce demand for landfill sites and transform recyclable waste into reusable materials for use in the construction, manufacturing and agricultural fields, including recycled glass for the use of road base in large infrastructure projects.

An important aspect of this will be providing incentives to businesses for opting for recycled materials over expensive virgin materials. Infrastructure Victoria will also explore methods to improve the state’s current collection and sorting processes, by setting higher standards for recycling facilities and ensuring contamination and spoilage of recyclables is minimised. A full report will be provided to the government in April 2020, with an interim report due by October this year.

China’s National Sword Policy has undisputedly sent Australia into a waste crisis, with the main route for dealing with its recyclables closed for good. However, in the midst of all the chaos, a unique opportunity presents itself. Australia can seek solutions to its own waste challenges through increasing the proportion of recycled plastic in locally manufactured products, changing the way plastic products are consumed and recycled, and reprocessing recyclables within its own borders.

A move towards a circular economy, which is already taking place overseas, will create green industries, generate more jobs, improve public health and safety, and reduce environmental degradation. This is the way forward for Australia, and an opportunity not to waste. 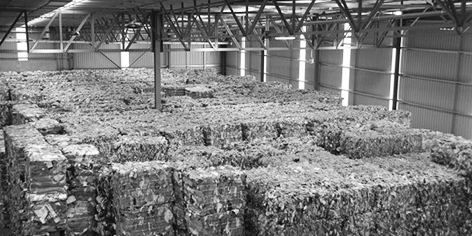