Despite the significant costs associated with driving a car, Melbourne’s dependence on the private vehicle is high, with utilisation higher in Outer Melbourne than the Middle and Inner suburbs.

Locality and Cost of Transport

Data collected by the Victorian Integrated Survey of Travel and Activity (VISTA) during their 2013 survey shows that of all trips made, the portion made by private vehicle were 81% in Outer Melbourne, 73% in Middle Melbourne, and 56% in Inner Melbourne[3].

A study conducted by Monash University considered the transport affordability of suburbs throughout Melbourne by calculating private vehicle costs and public transport costs based on data from the 2011 Census. The study found the most transport-affordable suburbs to be clustered around the Melbourne CBD and the inner east; spanning between Caulfield North, Kew, West Melbourne and Port Melbourne. Other transport-affordable areas included the bayside suburbs from St Kilda to Mordialloc[4].

The transport affordability of suburbs was generally found to decrease with distance from the CBD. Suburbs found to be least affordable include Dandenong, Werribee South, Frankston North and suburbs surrounding Broadmeadows[5].

A study conducted by RACV showed that people who left their car at home and caught public transport to work saved an average of $1,725 per year[6].

While operating a private vehicle cost the individual, it also costs the economy; the cost of congestion in Melbourne expected to triple by 2031 to $9 billion a year[7]. If we keep doing what we’re doing without change to our transport habits, it will cost every Melbourne resident $1,700 per year by 2030[8].

Industry recognises there’s an issue. Plan Melbourne aims to ‘break the link between growth and congestion’ by delivering more housing closer to jobs and public transport, and creating 20-minute neighbourhoods[9]. Activity Centres in locations like Dandenong, Ringwood, Box Hill and Sunshine are to provide decentralised job hubs outside of the Melbourne CBD to reduce the distance which people have to commute to work, thereby reducing transport costs for residents of Outer and Middle Melbourne.

Box Hill in Melbourne's east is becoming a successful activity centre and job hub, with several multi-storey developments approved throughout the activity centre set to increase the density of Box Hill [10].

However, the Charting Transport study (based on the 2016 census) shows a high portion of people travelling to/from Box Hill are still travelling by car, with approximately 78% of trips to/from Box Hill made by private vehicle. Other Melbourne activity centres further afield show higher rates of car use, with both Dandenong and Ringwood at approximately 87% private vehicle mode share[11].

While having a decentralised work hub at locations like Box Hill reduces the distance which people have to travel to work, real savings to individuals and the economy will only be realised by fewer cars on the road – fewer people making trips by private vehicle.

The most viable and frequently used alternative to private vehicle is public transport.

By comparison, the city of Parramatta, located approximately 20 km from Sydney’s CBD, has a private transport mode share of just 51% [12]; that’s roughly 27% lower than Box Hill.

Both Box Hill and Paramatta may be considered as public transport nodes, with each serviced by trains, trams (or ‘light rail’) and buses. Box Hill is one of the major stations on the Lilydale and Belgrave train lines which is rarely skipped on an express route. However, a breakdown of the usage of public transport shows that of the 44% of trips made to/from Parramatta 33% are made by train, with 11% made with bus or tram. Comparatively, Box Hill has an overall public transport mode share of 15%, with 11% made by train and 5% by bus or tram[13].

Sydney’s rail network includes loops which cross the radial network and form a pseudo spider web[15]. Commuters are able to change trains at intersection points on the network without having to travel all the way into the Sydney CBD and out again. The spiders web layout therefore provides better connectivity between Outer Sydney and other locations across the network.

Plotting the job hubs on the Sydney railway map shows that many of the Sydney job hubs are located at or near rail intersection points[16]. The Sydney job hubs with the highest public transport mode share (Parramatta, Chatswood, St Leonards, Burwood, Rhodes) are each located on or near intersections which are accessible by rail in more than two directions.

By comparison, Melbourne’s radial train system draws travellers into the CBD. Railway lines originate from the CBD and radiate outwards with some lines forming into branches, but most railway lines only intersecting in the CBD[17].

The current intention in Melbourne is for bus and tram services to form the cross-links of the spider web and provide connection between train lines.

Review of Melbourne’s tram network map, however, shows that most tram routes, like Melbourne’s train lines, are radial from the CBD. Most tram routes provide limited cross-suburb connections, with the exception of some tram lines in the inner eastern suburbs[18] – through the suburbs which were earlier discussed as being most ‘transport affordable’.

The remainder of Melbourne, outside of the CBD and inner east, has cross-suburb public transport permeability provided primarily by buses. Box Hill is an example of this, where the CBD of Box Hill is serviced by a radial railway line and also a radial tram line; tram route 109 runs almost parallel to the railway line from Box Hill to the CBD. Bus routes provide cross-suburb connection to locations such as Mount Waverley, Vermont South, Mordialloc and Templestowe.

Melbourne’s current system of buses providing connection between radial railway lines leaves much scope for improvement. Buses have a significantly lower passenger capacity than trains, they’re slow and are affected by congestion. We simply cannot move as many people by bus as we can by rail.

A study of 2016 Journey to Work data shows that approximately 3.5 times more journeys to work were made by train than by bus in Melbourne[19], which shows that people aren’t commonly traveling across the train-bus spider web. Melbourne’s high mode share of private vehicles would suggest that many people are preferring to drive their car rather than battle the train-bus mode change.

Breaking the Link Between Growth and Congestion

Not everyone works, lives and plays in the CBD. Melbourne’s public transport system needs to better respond to this.

In order to support Melburnians to leave their car at home or reduce the number of cars a family owns, and to support the growth of Melbourne’s activity centres outside of the CBD (Box Hill, Dandenong, Sunshine etc.); high quality, mass transit, public transport connections need to be provided in more directions than just into and out of the CBD.

The ‘spider web’ rail network has assisted Sydney in increasing its public transport mode share in work hubs such that they have become the highest users of public transport in Australia [20]. Other cities around the world which emanate the spider web network include London, Madrid and Tokyo. Melbourne would benefit from the same, and I believe it’s the key to shifting commuters from their private vehicle to public transport.

The Suburban Rail Loop project announced by the Victorian Government sets out to provide greater connectivity between Melbourne’s existing rail corridors; providing the cross-suburb links of the spider web. It’s proposed to intersect a number of the decentralised job hubs nominated in Plan Melbourne, including Monash, Box Hill, Broadmeadows, Sunshine and Werribee [21]. It would also provide vital rail connection to areas which are currently not serviced by rail, such as Doncaster.

The rail loop would provide greater opportunity for commuters to travel cross-suburb, and enable more people to commute by public transport to Melbourne’s activity centres and stimulate their growth.

One of the keys to breaking the link between congestion and growth is to provide better public transport. The more links and connections that the public transport network can provide through suburban Melbourne, the more people will be able to enjoy the ‘20-minute city’, leave their car at home and reduce their cost of living.

[1] [6] RACV article titled ‘Why you should leave your car at home today’, Written by Dominique Torpy, RACV - Public Transport and Mobility Officer, September 07, 2016

[7] The Age, Road congestion to become a $9 billion drag on Victoria's economy, report warns, by Adam Carey 22nd May 2015 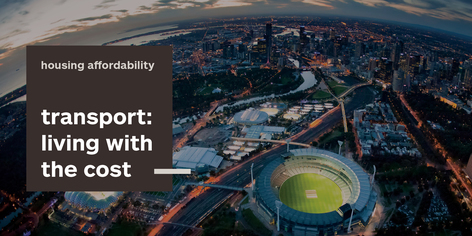 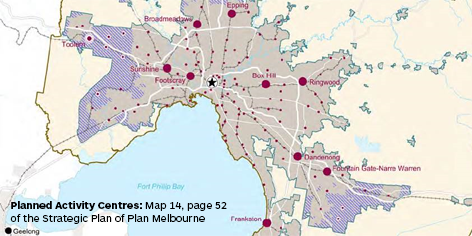