As Melbourne’s population is growing at a rapid rate, it is important that our transport system keeps up to meet the needs of this growing population. The Suburban Rail Loop Authority has been set up to deliver the Suburban Rail Loop project which will connect communities across the middle suburbs with jobs, schools, universities and the airport without having to travel into the CBD. Current staff numbers of approximately 40 people are expected to ramp up to 300 staff by 1st of July next year, and it is ultimately expected to create up to 20,000 jobs during the construction phase.

The proposed Suburban Rail Loop will provide a 90-kilometre loop through the middle urban suburbs of Melbourne. It is much more than a transport project, it’s a ‘city shaping’ project and is viewed as a critical infrastructure investment in helping to cater to Melbourne’s growing transport demands in the future. The Suburban Rail Loop aims to take around 200,000 vehicles off the road once it is completed and meet the transport demands of more trips to key destinations in the middle urban suburbs of Melbourne. The loop will not seek to cater for mass transit but rather lots of short trips connecting to jobs, education and retail opportunities.

It is needed to support Melbourne’s burgeoning population growth of up to 8 million residents by 2050 and seeks to ‘value-add’ at key locations. It seeks urban renewal and uplift as a priority to cater for future population growth and aims to increase residential densities in middle urban locations along the alignment of the network and particularly at station locations. The aim of increasing housing densities in middle ring suburbs is to minimise more outer urban growth and create savings by not needing to build the associated outer urban infrastructure and services such as schools, hospitals, shopping centres, etc.

The goal of increasing densities and building heights in some middle ring areas could present some challenges but it is apparent that many of the Councils located along the designated loop are genuinely excited about the prospect of growing their Activity Centres at key locations along the loop corridor and meeting the aspiration of providing 20-Minute neighbourhoods with work, shopping, entertainment and lifestyle opportunities.

Sunshine, Broadmeadows and Clayton will be the three transport ‘super hubs’ providing key linkages to other parts of the rail network, including the future Airport Rail Link and the Metro rail tunnel. The loop will also cater to the dominant employment nodes and provide linkages between the Monash, La Trobe, Sunshine and Werribee National Employment Clusters (NEICs) and service key precincts in Box Hill, Burwood, Broadmeadows and the Airport.

Monash, Deakin and La Trobe Universities will all be linked by the suburban rail loop and the first two will be part of Stage 1 works. They will be well serviced by future railway stations at Monash, Burwood and Bundoora.

The rail loop will be implemented in stages over a 30-year timeframe and its main focus will be the section between Cheltenham and Melbourne Airport. It is expected to become the busiest stand-alone rail line in Victoria and cater to up to 400,000 patrons by 2051.

Site investigations are currently underway for Stage 1 and $300M has been provided for the initial investment case. The infrastructure works associated with Stage 1 aims to start in 2022 and run from Box Hill to Cheltenham and is expected to take in the order of 7 to 10 years to complete and involves the construction of 27km of underground tunnel. It will interface with some existing railway stations, but maybe not directly next to them, dependent on the location. For e.g. Box Hill is expected to be positioned very closely to the existing Box Hill transport interchange whereas Burwood is expected to be closer to Deakin University to optimise convenient linkages to jobs and education and provide opportunity for increased residential densities.

The State Government will encourage more jobs to be concentrated at the proposed stations (e.g. more office accommodation in key areas such as Box Hill and Sunshine) to support the 20-Minute neighbourhood policy.

Land speculation is already occurring along the Stage 1 alignment, particularly in the vicinity of proposed railway stations. The full business case for the rail loop will require the development of Master Plans for each precinct. These master plans are proposed to be prepared in consultation with stakeholders and the local communities.

It is clear that the Suburban Rail Loop will be an integral part of the overall transport infrastructure package as Melbourne continues to grow its population at the fastest rate in Australia and will help to ensure that Melbourne remains a sustainable, liveable and world class city in the future. What is less clear at present is the competing priorities of other transport infrastructure projects, such as the timing for the Melbourne Metro 2 tunnel, which is viewed as the second city rail tunnel proposed to run between Newport and Clifton Hill via the city centre, and importantly includes a station within the emerging Fishermans Bend precinct. Although, at this stage, there is no committed funding or policy commitment to this project. 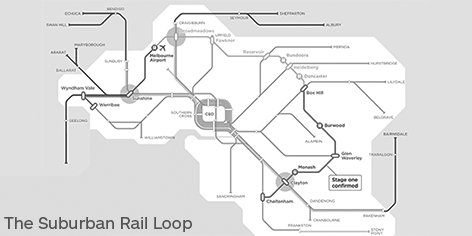