Mia Zar, one of our Senior Planners, recently took part in the Property Council of Australia’s study tour of Singapore. Here’s Mia’s story…

Singapore is a city that I had not previously visited and knew little about. Now, when I think of Singapore, I think of a highly ambitious city striving towards a vision which has been evolving since 1958 (also, the humidity!).

In short, Singapore gets things done.

Much of what Singapore is known for is the result of decades of targeted urban planning; the lush Singapore of today is the result of the Garden City vision which took root over 50 years ago [1], and the large public housing estates – symbolic of efficiency and progress - have been built steadily over the past 60 years. This, combined with Singapore’s social cohesion of a variety of ethnic backgrounds, has made the city one of the most liveable in the world.

There is no doubt that there are unique attributes that shape and streamline the planning and development landscape of Singapore:

The factors above clearly simplify the process of planning and implementing change – Singapore has a relatively small area to plan for, there is consistency and stability in government and, as the primary land owner, the government undertakes the planning and much of the development) minimising conflicts in land use and development outcomes. In addition, there are also subtler benefits from having a majority of the resident (voting) population that relies on the government for housing [4].

There are several matters that have been integral to Singapore’s transformation since independence and hold lessons for us here in Victoria. This includes:

Development (and redevelopment) is underpinned by an ongoing and highly tuned assessment of highest and best use – not surprising given the limited land available.

The incredibly high land values facilitate major projects that would not be financially viable in other markets, with the government able to finance the next generation of infrastructure through relocating existing infrastructure to less desirable areas.

A prime example is the Tuas Mega-Port which will consolidate the three existing port terminals in the south-east of the country to Tuas in the south-west. The Mega-Port will more than double the capacity of the existing port, with the old port land to be redeveloped into a 1000Ha mixed-use waterfront district (three times the size of Marina Bay). The relocation was announced in 2012 and will start its first phase of operation in 2021, with full completion expected in 2040.

There is also a strong push for existing and future infrastructure to be located below ground to free up the existing land mass. Singapore has traditionally relied heavily on land reclamation to serve the growing need for land but with this is becoming increasingly difficult from an environmental and resource perspective. The 2019 Master Plan takes clear steps towards achieving this goal, with 3D underground mapping of Marina Bay, the Jurong Innovation District and the Punggol Digital District included and an aim to create a subterranean map for the whole country. This will be used to identify spaces for transportation, industrial, utilities and storage - allowing land currently used for these purposes to be redeveloped.

Integrated Transport and Land Use Planning

From this perspective, Singapore is heaven for an urban planner. At the top of the planning hierarchy is the Concept Plan (CP); a high-level strategic land use and transportation plan which guides development over the next 40-50 years, reviewed every 10 years by the Urban Redevelopment Authority (URA). The CP is implemented via the Master Plan (MP), a statutory land use plan which guides development over the next 10-15 years and is reviewed every five years, and the Land Transport Master Plan (LTMP) which sets out the next 20 years (also reviewed every five years). That’s right, a land use plan and a transport plan which are both 'singing from the same hymn book”'in a truly integrated approach.

This has been the case since aggressive slum clearance and rehousing programs in the 1960s effectively created a 'blank slate' for the country’s urban structure and transport system, with Singapore implementing transit orientated development across the country well before it was popularised by New Urbanists in the 1990s. The first CP in 1971 shows a Mass Rapid Transit (MRT) system with spines radiating out from the CBD, with the centres of ‘new towns’ (as the public housing estates are known) located at stops along the spines. This approach has continued, with MRT extensions planned alongside ‘new town’ locations and the introduction of new circular and east-west lines (such as the newly opened Downtown Line) to increase network permeability.

The scope of the CP, MP and LTMP and the evident level of coordination between government departments that these plans represent is attributable to the fact that there is a clear long-term vision for the country. In addition, the city-state structure helps to eliminate bureaucracy between different tiers of government. Government departments are carefully structured to maximise efficiency (for example the Land Transport Authority is responsible for roads, rail, buses, cycling infrastructure and pedestrian infrastructure and is therefore forced to view these aspects of the country’s internal transport holistically rather than as competing forces).

Not surprisingly, Singapore’s planning framework is detailed and prescriptive - development applications must accord with the floor area ratios and specified uses set out in the MP, with Special and Detailed Control Plans (SDCP), which are akin to our planning overlays, identifying areas that are subject to specific controls and guidelines as set out in Development Guidelines (DGs). The SDCP and DG can be updated at any time and tend to address specific built form outcomes through the introduction of new guidelines (including incentive schemes).

Singapore’s planning framework uses a mix of mandatory and discretionary controls, with strong encouragement provided through targeted incentive schemes. Whilst these incentive schemes take many forms, they most commonly allow for a density bonus in exchange for a specific design outcome. Current schemes relate to indoor communal recreation areas for apartment buildings, the conversion of excess car parking to new uses, Green Mark certification, underground pedestrian links (which are also subject to a cash grant) and, unsurprisingly, landscaped sky terraces.

These schemes are key to the realisation of the government’s development objectives and appear to be a very effective mechanism for encouraging preferred built form outcomes. As noted in a previous Ratio article on this topic, density bonuses are particularly effective in markets with high property prices and limited development opportunities (such as Singapore).

Whilst the development landscape lends itself to this approach, there are two other factors which make these schemes a particularly effective market intervention; their flexibility and the ongoing analysis of outcomes.

As the incentive schemes sit within the DGs they can be introduced, amended (/fine-tuned) or withdrawn at any time without notice or consultation. This allows for an incredible level of flexibility when compared to a Victorian planning scheme which would need to undergo the full planning scheme amendment process to introduce, change or remove these types of provisions. This, paired with sophisticated development data collection and analysis, ensures that schemes can be monitored and adjusted to run efficiently and effectively.

Whilst slightly off topic, it is interesting to note that incentive schemes are used widely in Singapore particularly in relation to furthering social policy outcomes. For example, the Proximity Housing Grant provides $30,000 to married children who buy a property to live in with their parents, or $20,000 to buy a property within 4km of their parent’s residence [5].

In many ways Singapore’s small size has been its greatest asset. Land is treated as a precious and finite resource, deserving careful and long-term planning. In my view, this is the basis for much of Singapore’s success over the past 60 years - a strong vision for sustainable development, with consistent progress aided by a stable and financially secure government. Whilst Victoria does not share the same level of control over the land and development process, there are lessons to be learnt, particularly the commitment to an overarching plan and coordinated approach to land use, transport and infrastructure, elements which underpin the efficiency and equity of all cities.

[2] Compared to approximately 450 people per km2 for Greater Melbourne

[3] Also subject to the 99-year leasehold 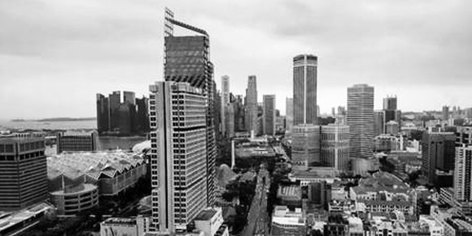