Australian housing has traditionally been defined by the quarter acre block. The dream of purchasing your own home with a large backyard is still very much a part of the collective cultural consciousness and is regularly seen as a ‘need’ rather than a ‘want’.  In Melbourne, many of us are slowly coming to the realisation that this dream has some hefty consequences, from urban sprawl and increased infrastructure costs to social disconnection, car-dependence and, of course, unaffordability.

How 'bout some density?

Despite the numerous “liveable city” accolades Melbourne has amassed, the current state of housing (un)affordability is pushing more and more Melburnians into housing stress. The median house price across Melbourne is approximately $880,000[1] (June quarter) – 9.9 times the average wage (noting that a ratio of 3:1 is considered affordable)[2].

Whilst the average greenfield lot is a comparable bargain price of $304,000[3], there are significant social and environmental disadvantages (both at the individual and societal level) of living at the urban fringe which undermine the initial affordability of the land. Whilst this housing may be less expensive; long commutes, multiple-car families and poor access to services combine to create poor lifestyle options and multiple societal issues.

A better way to provide affordable housing is with higher density development in established areas. Across Melbourne multi-unit development sells at considerably lower than the median price, $519,000[4], and 71% of these are completed within 10 kms of the CBD[5], providing a greater lifestyle factor and significant community benefits.

Contemporary planning policy reflects the need for a housing typology shift with Plan Melbourne setting a target of 70% of housing growth to be in established areas[6], with the remaining 30% in greenfield areas. Whilst there is some conjecture about the practicality of this target, current predictions have Melbourne missing the target by as much as a 5% margin[7].

So, why are we still building on the urban fringe rather than providing sustainable higher quality affordable higher density living?

The answer lies in Melbourne’s original drive to suburbanise, which originated from the slum conditions of the inner-city suburbs such as Fitzroy, Richmond and North Melbourne. These areas had poor sanitation, very little green space and suffered from extreme overcrowding. Understandably, those who could afford it took to the suburban lifestyle which offered among others, two key benefits: space (internal and external) and privacy.

The positives of larger lots at that time were clear and the negatives were few given the low population and abundance of cheap land. This was the start of the ‘Great Australian Dream’ in Melbourne. These original reasons have become the elephant in the room in cultural Australian housing perceptions and fear of the density.

‘Quimbyism’ (everyone loves a Simpson reference)

Primarily, we highlight sometimes reactionary measures taken at by local government level in established areas to create impediments to good higher density development. A slew of planning policies at the local level, such as Design and Development Overlays that place highly restrictive mandatory built form requirements in activity centres, to the overuse of the Neighbourhood Residential Zone, are designed to create impediments to higher density development in well- established areas. These restrictions are placed in response to local constituents whose objections may not be based on design or character grounds but often deeply held belief that increases in density are inherently bad.

Clearly, the cultural paradigm needs rebalancing. There is certainly value in the retention of neighbourhood character and in lower density communities in some circumstances.  However, to facilitate the housing outcomes our city needs, a cultural value shift is required which places more weight on the provision of quality higher density housing in well-established areas.  A good place to start is to re-examine the original reasons for Melbourne suburbanisation.

A primary reason for this belief is the desirability of a backyard, despite clear industry trends demonstrating that while still desired, large backyards are demonstrably not considered essential in Melbourne. Where detached housing is being constructed, purchasers are tending to look for greater built floor area paired with smaller lot sizes. Since 2009 average lot sizes in Melbourne have reduced from 514 square metres down to 405 square metres[8], a decrease of approximately 20%. Conversely, between in the last thirty years detached Australian homes have increased in floor area by 30%, with Melbourne building homes with an average floor area of 242.8 square metres, the largest in Australia, which is an annual increase of 1.5%[9]. Melburnians are increasingly demanding larger internal spaces and smaller external spaces (backyards).

Secondly, many of our readers will have heard the contention that higher density living options are ‘dog boxes’ or the like. Examples of a new generation of apartment design that proves that this contention is antiquated range from the newly introduced Clause 58 to development examples led by the Nightingale franchises.  The resultant design revolution provides a diversity of high quality living options in close proximity to essential infrastructure and services.

The third, and least tangible, reason for the ‘Australian Dream’ is the desire for ‘privacy’ and ‘security’. A handy piece of research undertaken in Perth[10] published in 2015, finds that the most common negative perception of higher density development is a ‘diverse mix of people in the precinct’. In summary, the research finds that the desire for ‘privacy/security’ stems from a fear of others, of difference and of social change. It concludes that a society that has greater social cohesion/engagement will exhibit less resistance to higher density housing.

Hope on the Horizon

However, it’s not all bad news. Even as some communities put up a significant fight against higher densities, an analysis of current housing trends illustrates that the dream is changing. Melburnians are more open to high density living, with more apartment completions (25,900) in Melbourne than greenfield housing sales (23,750)[11] in 2016-2017, with a similar pattern projected moving forward.

PwC CityPulse[12] assesses Melbourne’s suburbs against three key liability metrics:  Live, Work, Play. When matched with population densities[13] there is a clear correlation between proximity to the CBD, higher population density and the scores on these three metrics.

Typically, areas like Central Richmond and Brunswick, with high population densities of 65 and 53 persons per hectare, produce high ‘live and play’ metrics whereas typically less dense areas like Kilsyth and Eltham (11.6 and 17.8 persons per ha respectively), produce lower ‘live and play’ metrics. This may seem obvious, but it provides clear evidence that actively disproves the notion that Melburnians like, or ‘need’ to live in places that have lower residential densities.

Designing deck chairs on the Titanic

In distilling the reasons for the ‘Great Australian Dream’, we can see that a large part of the resistance to higher density development cannot be solved by design as it is backed by perceived cultural beliefs and a fear of the ‘other’. By focusing on individual design responses and satisfying draconian statutory regulations we miss the real issue of cultural perception and social cohesion.

The first lesson is that in order to increase our capacity to provide quality affordable housing Melbourne requires greater government leadership promoting social engagement and cultural cohesion. This would constitute a government leadership program that promotes of the basic message of ‘love thy neighbour’. A reduction fear of the ‘other’ within our community will not only contribute to lessened negative perceptions of higher density housing but would also undoubtedly have significant other positive impacts across society.

Singapore leads the way in proven government leadership programs that promote social cohesion and engagement. In the almost 60 years since Singapore independence, the small, culturally diverse, country has seen a dramatic housing typology change that is unprecedented. Singapore has gone from a country with the world’s greatest slum[14] to the second most dense country in the world, behind Monaco (noting that Singapore is approximately 370 times larger than Monaco)[15].

In undertaking an extraordinary culture shift like this, Singapore recognised that significant government leadership and investment in community engagement and social cohesion was required. We recognise that this success may be assisted by some aspects of Singaporean democracy/society that not many would suggest we imitate; however, the extraordinary investment and commitment in community cohesion remains relevant. The Singaporean Ministry of Culture, Community and Youth is responsible for the many successful programs that focus on the basic message of ‘love thy neighbour’ and ‘cultural diversity is good’.

The second lesson is that a greater focus on strategic outcomes and the benefits of what high quality higher density development can achieve should be put into our planning and political systems. The existing focus on rigid aspects of individual development such as maximum building height and building envelopes reinforces community perceptions on what is bad with development.

The third, and final, lesson is that, like in Singapore, an extraordinary response is required. Singapore created the (Housing Division Board) HDB, which has now constructed over 1 million flats which house over 80% of the population, 90% of those are owner occupied[16]. There are many examples of highly successful government organisations influencing Melbourne’s development and there are many reasons to believe that a corporation set up to promote affordable high-density development would be a success.

Higher Density Housing is a key plank in the solution to Melbourne’s housing affordability epidemic. While we try to resolve housing on a case-by-case basis, we miss the fundamental issue of cultural perception. Ultimately, evidence shows that Melburnians prefer to live in areas with higher densities but at the same time we increasingly see other well-serviced areas put up barriers to higher density development. Research demonstrates that this is not able to be resolved by design, but by increasing social engagement and awareness. Lessons from Singapore indicate that an extraordinary response which removes the focus on mandatory built form measures and instead prioritises the provision of quality affordable housing and creates greater social cohesion and engagement in strategic planning processes is needed. 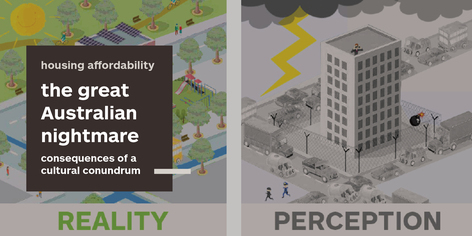 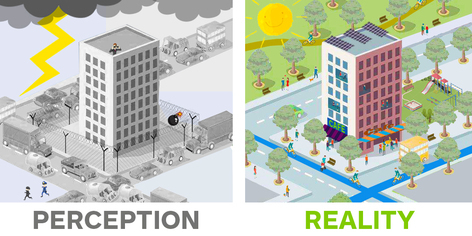