The cost of protecting the ‘benefits – retaining the liveability of suburbs and block sizes’ derived from zoning regulations has now been quantified by the Reserve Bank. Its findings correlate to a substantial premium that is paid on house prices which has profound implications upon housing affordability, a key housing initiative espoused in Plan Melbourne.

The recent release of the research discussion paper, The Effect of Zoning on House Prices, reports that zoning has contributed materially to the significant rise in house prices across Australia’s largest cities since the late 1990s.

In Melbourne, it is estimated that zoning raised detached house prices 69 percent above marginal (supply) costs. This equates to a $324,000 impact based upon the average house price.  For apartments, zoning restrictions are estimated to add $120,000. Importantly, the Paper makes it clear that these estimates are not the amounts by which prices would fall if such zoning restrictions were not in place.

Nonetheless, the findings demonstrate that zoning is a major contributor to the rise in housing prices. There is also a correlation between the largest zoning effect (in dollar terms) and where demand to develop land is the highest, which is predominantly the inner, middle ring and bayside suburbs of Melbourne (as pictured right).

A range of other factors also contribute to property prices such as increased demand from population growth, tax incentives for investors and rising construction costs. However, the paper acknowledges that the increases in building structure values have declined substantially as a proportion of the average house price.

Regardless, the substantial premium on house prices raises the question (once again) on the appropriateness of Melbourne’s current residential zones and how they have been applied across each municipality. Will they deliver on the housing objectives outlined in Plan Melbourne for greater supply, diversity and affordability to serve population growth, changing household structures and income groups? Importantly, will the now quantifiable costs of zoning push housing affordability to the forefront of the minds of decision makers on residential developments and residential zoning roll outs? Time will tell. 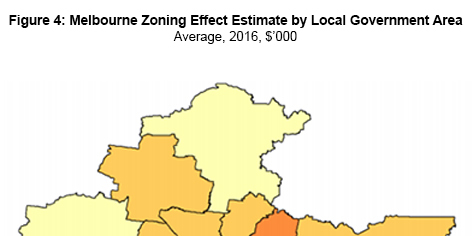 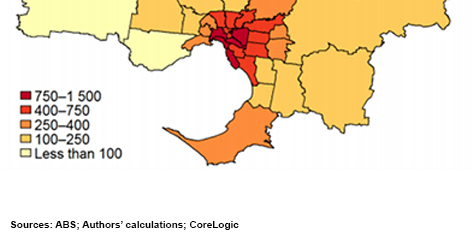