Road reserves make up a large portion of the urban space within cities. Road reserves serve a dual function of providing space for traffic and active modes of transport to move as well as contributing to the character of a neighbourhood. Historically, the space dedicated to vehicles has been disproportionately larger than the space left for active modes of travel. As a result, public spaces have been compromised, and the sense of place and community has virtually disappeared in several neighbourhoods.

Recognising this issue, in 2018, the City of Darebin implemented the ‘Streets for People’ feasibility study. The study is aimed at restoring a balance in the role of streets between their functional modal requirements and their role in defining places and spaces for people[1]. Focus is to be given to reconfiguring streets that prioritise the safety of the most vulnerable road users. As part of this strategy, the City of Darebin has engaged Ratio’s Traffic and Urban Design teams to conduct a 'placemaking' study for the Croxton West area in Northcote.

The ‘Streets for People’ project aims to improve the walking and cycling access to residential areas that have been affected by increased traffic volumes. The project presents a real alternative for neighbourhoods that can improve the quality of life of their residents, without using an enormous amount of resources.

Similar to 'tactical urbanism' initiatives around the world, community engagement consultations are crucial for the identification of issues, conflicts, and constraints, while also providing an invaluable resource for the identification of potential opportunities for the areas. Community engagement for the Croxton West area is expected to begin in early to mid-October 2019.

How is Melbourne performing generally in relation to this matter?

As part of the Brunswick Streetscape Masterplan, the City of Yarra recently asked the community for feedback on how to improve the streetscape of Brunswick Street. Feedback was to be submitted via the City of Yarra’s website www.yousayyarra.com.au/. More than 271 ideas were shared by the community on an online interactive map, 317 people filled out an online form, and around 300 people visited the three pop-up sessions. The City of Yarra had numerous other data collection methods as well to provide a diverse feedback stream.

As part of the Transport Strategy 2030, the City of Melbourne has stated that in order to remain globally competitive, the growing population of the city will need streets and public spaces that are welcoming, safe, and comfortable.

The amount of street space allocated to pedestrians is not proportionate to the number of pedestrians using the Hoddle Grid, especially in the ‘little streets’ of the CBD. This has led to the thinking that these ‘little streets’ can be converted into pedestrian priority areas to reflect the proportion of pedestrians using these spaces. An example of this is the Bourke Street promenade. Some tried and tested initiatives that can make Melbourne more pedestrian friendly can be achieved by removing kerbs to create more accessible and permeable shared roads. Unlike standard divided roads, within shared roads, vehicles are not given priority and in turn, are forced to slow down to match the speed of the most vulnerable road users. Traffic calming elements such as bollards, street furniture, atypical pavement materials and coloured pavements can improve awareness between all the road users and force everyone to behave more cautiously; significantly improving safety

In Spain, the ‘Super Blocks’ that form part of Barcelona’s Urban Mobility Plan (2013-2018) are an effective example where active modes of transport have been prioritised. The model creates 'mini neighbourhoods' within nine mixed-use blocks (400 X 400 metre). These blocks traditionally experienced high traffic volumes, but the ‘Super Block’ model seeks to restrict vehicle traffic and prioritise the movement of people. The car speed limits within the Super Blocks is restricted to 10km/h. The speed limits within the periphery streets remain 50km/h, providing a viable alternative for through traffic.

A study undertaken by professor Mark Stevenson of the University of Melbourne in collaboration with the Barcelona Institute of Global Health has been published in the Environment International. The study concludes that the Super Block model has increased life expectancy by reducing 700 deaths a year due to a reduction in air and noise pollution, greater access to green spaces and an increase of physical activities for the community.

These type of initiatives can be complex to implement, especially in high traffic and high-density urban areas like Melbourne's Hoddle Grid. However, by having a comprehensive traffic management plan that considers urban planning and urban design approaches as well as inputs from the most affected communities, these initiatives can be implemented successfully. 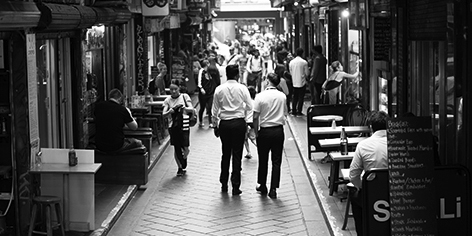