The Victorian Government has announced a new Statutory Authority, with a $100 million budget allocation, to carry out investigation and design for a North East Link to connect the Metropolitan Ring Road and the Eastern Freeway/Eastlink.

A road project of this location and type has been under investigation since the 1980’s and it is encouraging to see a commitment to proceed with the initial stage of work.

The road is likely to be a high-speed freeway and tolls will apply, so it will be similar to EastLink. It is intended to attract car and (especially) trucks from the Rosanna Road/Bulleen Road route. That will provide major congestion and amenity relief to the residential areas of Watsonia and Heidelberg. It will also be great for freight operators serving the northern and eastern suburbs.

Three options have been identified by the Government for investigation and design - see image:

There is not sufficient land reserved for any of the options, so all of them would require extensive compulsory land acquisition, and / or tunnelling. All three would require major bridge crossings of the Yarra River. The central and outer-eastern options go through steeply sloping bushland, so conventional road construction would produce major impacts.

Local Councils, communities, businesses and individuals will have a keen interest in the investigation and design. They will want to ensure that they are fully informed, and that their interests and concerns are fully understood and respected.

At ratio: our Traffic Engineers and Town Planners are very experienced at assisting in such situations, so can provide information updates and expert technical representation throughout the process, which is likely to extend over several years. 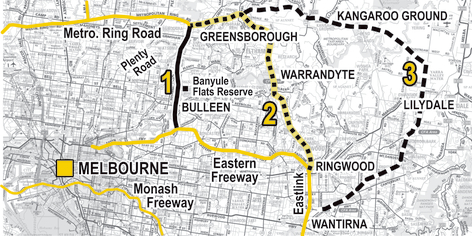