Following several controversial development approvals in proximity to the Yarra River in recent years, public and political interest in preserving values of the Yarra has led to the State Government introducing new interim controls designed to manage the impact of development in these areas.

Amendment GC48 applies to land within approximately 500 metres of the Yarra River between Punt Road, Richmond and the outer extent of the township of Warrandyte. It includes two new planning controls, a Design and Development Overlay (DDO) and a Significant Landscape Overlay (SLO).

These controls are applied across six municipalities (Yarra, Boroondara, Stonnington, Manningham, Banyule and Nillumbik planning schemes) to ensure consistency between the objectives, permit triggers and decision guidelines for development within the Yarra River environs.

Our review of the controls confirms that they generally seek to ensure that new development remains below the existing tree canopy, is responsive to the natural landscape and environmental values of the Yarra River and minimises the removal of native vegetation.

The controls include mandatory building height and setback requirements and discretionary guidelines which seek to minimise overshadowing of public open space, the removal of existing vegetation and earthworks, maximise permeability, and guide building materials as well as other siting and design considerations.  The DDO also requires that all applications within 100 metres of the banks of the Yarra River be referred to Melbourne Water as a determining authority.

The controls operate on a ‘sliding scale’ depending on how far a site is from the river, with varying degrees of limitation placed on matters such as building height and setbacks in the different river corridor areas.

There are no transitional provisions for existing applications, with the new controls applying as of the gazettal date of 24 February 2017.

The controls will apply on an interim basis and expire on 31 January 2021. 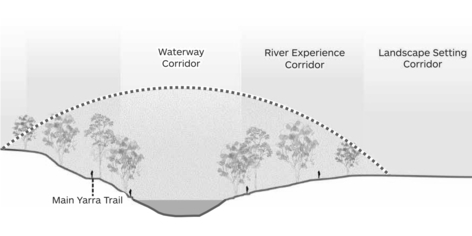