It has taken 407 days, but finally some clarifying direction on the application of the mandatory garden area requirement has been provided by two Red Dot VCAT decisions.

The requirement, applying to the construction or extension of a residential building whether a permit is required or not, mandates a minimum percentage of a lot be set aside for garden area: 25 per cent for a lot between 400-500sqm, 30 per cent for those between 501-650sqm, and 35 per cent for those more than 650sqm.

In the absence of a department planning practice note to guide the control’s application or clear definition of terms in the planning scheme or legislation, planners and lawyers alike have been grappling with the meaning of ‘lot’, ‘roofed areas’, and ‘uncovered outdoor areas’ in calculating the requirement since it was introduced by Amendment VC110 in March 2017.

The matter of Guler v Brimbank CC (Red Dot) [2018] answered the question regarding eaves, determining they are roofed areas and therefore cannot be included in the calculation. While this seems a logical application of the common understanding of roofed area, the exclusion afforded to eaves in measures like the application of Standard B17 to side and rear setbacks created an interpretative grey area.

This line was reflected in the applicant’s submission in that it raised a “perverse outcome” of eaves being lost as a building feature, quickly trimmed where proposals struggle to meet the requirement. While doing so in this case would have squeaked over the threshold at 35.08 per cent, Council opposed the change as out of keeping with the design detail character of the area.

The consideration in Sargentson v Campaspe SC (Red Dot) [2018] was how the garden area was determined where more than one lot is part of the application.

A permit was sought for the construction of two double-storey townhouses and re-subdivision of two existing lots of 1,012 square metres and 24 square metres. Council’s view was that the garden calculation of 30 per cent should be applied to the resultant lots of 506sqm and 530 sqm applying the wording as it relates to subdivision.

The applicant’s approach was that the garden area be applied to the planning unit (i.e. the combined area of the two lots), which would set aside 35 per cent of the site for this purpose.

The Tribunal’s consideration was that Council’s approach did not correctly apply the provision wording, as the combined development and subdivision application was not creating lots of vacant land. Likewise, it said the applicant’s position could not be supported by the language of the provision.

Instead, without direction on the intent of the provision’s drafters, Member Whitney interpreted that ‘lot’ in the provision referred to the existing lot arrangement, therefore the garden area would be calculated on the larger lot and would not apply on the smaller.

The Tribunal’s lengthy consideration concluded with an observation on the garden area requirement’s practical application, where it said:

“As a final comment, it is somewhat perplexing to me that this extent of analysis is required in order to determine whether a mandatory provision of the Scheme is or is not met. Perhaps consideration could be given to some of the matters raised above and further clarity provided.” 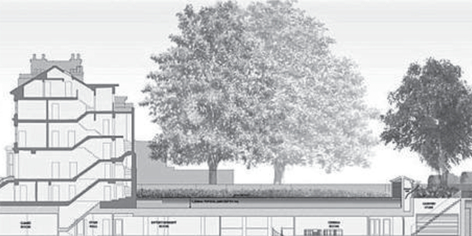