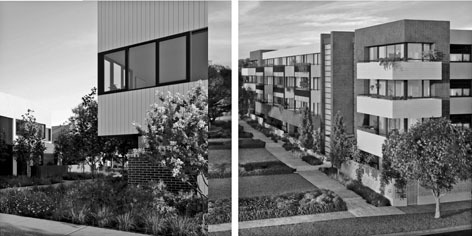 ratio: worked with Cedar Woods Pty Ltd, DKO Architects and MDG Landscape Architects on Jackson Green, a significant infill redevelopment site in Clayton South. The 6.5 HA site was previously occupied by Sigma Pharmaceuticals and will accommodate up to 350 dwellings at completion.

The site layout was heavily influenced by the projects namesake, a large Port Jackson Fig tree which sits close the Haughton Road frontage. This tree will be retained in the centre of an attractive and functional open space area which welcomes pedestrians and cyclists into the site.

The scale of this project necessitated early engagement with a number of Council departments in order to determine key functional aspects such as the internal road layout, drainage and pedestrian links to surrounding streets. The interface with existing residential properties along McMillan Street required careful consideration of building setbacks and massing to ensure that contemporary design of the townhouses would sit comfortably with the existing traditional building stock.

A collaborative approach with Council led to agreement on the overall concept for the site in mid 2015, with the first planning permit for 85 townhouses in the eastern portion of the site following shortly after. A planning permit for 'Wattle', a four storey apartment building fronting Haughton Road, was secured in mid 2016, with a planning application currently under consideration for a further 66 townhouses within the western portion of the site. Civil construction has now commenced on site, with further applications to be made for apartment buildings fronting Centre, Haughton and Main Roads.

ratio: is proud to work with Cedar Woods to promote urban consolidation and regeneration in Clayton South.