The use of electric cargo bicycles for deliveries is not something people usually associate with regional Victoria. However, some regional Councils may be beginning to consider the introduction of innovative and sustainable transport options for deliveries within their major business hubs. This is reflected in the Central Goldfields Integrated Transport Strategy (ITS) 2020-2030 adopted last month.

It is identified within the recent ITS that the vast majority of the Shire’s jobs, residents and services are located within the sub-regional town of Maryborough, which has a population of approximately 8,000. This concentration provides opportunity for the introduction of alternative transport modes to private vehicles, such as cycling, walking as well as access to shared transport resources. The ITS outlines four desired outcomes, one of which is ‘Access to rideshare carshare and bikeshare’. In order to achieve this outcome, the ITS has specified a series of actions for Council to undertake, of which one was:

Electric cargo bicycles are already popular in many European cities, such as Copenhagen and Amsterdam, where local governments have already moved towards increasingly bicycle friendly neighbourhoods. These delivery bicycles are now becoming increasingly common in Melbourne and Sydney as businesses begin to realise their expediency. Electric cargo bicycles typically have a capacity to carry 100kg, which is ideal for errands involving small deliveries for commercial businesses where a larger courier vehicle is not necessary.

As rural towns such as Maryborough continue to grow in both population and economic significance, so does the opportunity for sharing services. Some may raise concerns about electric bicycle sharing services, after Melbourne’s abandoned ‘oBike’ sharing system which ended up with many bicycles being dumped in the Yarra River amongst other places.

The proposed system included within the Central Goldfields ITS will include two e-cargo bikes and will be managed by Council. The bikes will be used by Council staff initially before being available for lease by businesses within Maryborough for local deliveries. A Council operated service used by local businesses is unlikely to result in misplaced bicycles, as the bicycles will not be left unsecured when not in use and there will be accountability for those who lease them. This service will be a trial with the potential for more electric cargo bicycles to be purchased if the service is a success and there is a demand.

In addition, the ITS also proposes the introduction of a shared path network to improve bicycle and pedestrian connectivity. Future users of the electric cargo bikes may be able to utilise this shared path network if wishing to avoid on-street vehicle traffic.

These actions are just a few of many included within the ITS recently adopted by Central Goldfields Shire Council in an effort to provide alternative transport modes to the citizens and workers in Maryborough. The adoption of sustainable transport by more municipalities, in rural and urban areas alike, represent a positive shift in multi-modal transport in areas traditionally dominated by private motor vehicles.

To learn more about e-cargo bikes or other emerging green initiatives, please don’t hesitate to reach out to our team. 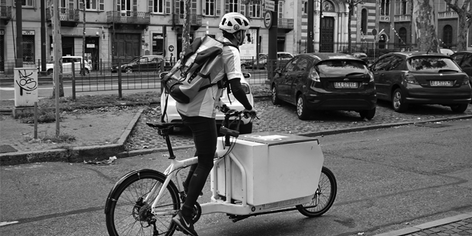