The balance between supply and demand will always be at the forefront of discussions around affordable housing where the provision of shelter is largely left to the free market to resolve, as is the case in Australia.

This seesaw between these two rules is currently heavily weighted towards the demand end in Victoria as it seeks to house 125,000 new citizens each year, the vast majority of which are located in Melbourne.

Throttling back the demand pressures of population growth through limiting migration may present some momentary relief, and appeal to a populist political bent. However, amongst its many benefits, population growth provides important fuel for Australia’s ongoing economic growth and adds to a vibrant and cosmopolitan society.

The housing industry’s demand for “increased supply” as a solution to more affordable housing has merit, although is clearly not the only answer. The Grattan Institute, in its study Housing affordability: re-imagining the Australian dream (2018) forecast building an extra 50,000 homes a year for a decade could leave Australian houses prices 5 to 20 per cent lower. But such increases in supply is a challenge as this represents an increase of about 25 per cent on the current levels of construction across the nation.

So how can planning help to quicken the pace? One solution is to set housing targets, tasking levels of government, from State through to local government, to commit to a specific number of dwellings to be delivered. Such an approach will clearly signal through planning controls where new housing stock is to go, and develop accountable implementation measures across the metropolitan area, resulting in more homes on the ground.

Housing targets for every metropolitan Council, ensuring a shared responsibility for providing housing based on infrastructure and other strategic planning directions, will provide a clear indication to the market where housing is to occur, allowing for investment decisions to be made with a higher level of certainty.

The population challenges of a growing Melbourne have been forefront of current and past metropolitan planning strategies but the targeted delivery of housing to specific locations has not been pursued as a policy option. At least not yet.

The Plan Melbourne Review 2016 Ministerial Advisory Committee Report (June 2015) recommended the 70/30 target, where established areas would provide 70 per cent of all new housing while the remaining 30 per cent would be achieved in the growth areas. This broad target made it through the Refresh process to form part of the current Metropolitan plan, Plan Melbourne 2017-2050.

While currently left on the policy cutting room floor, the Plan Melbourne 2017-2050 implementation plan is developing a base of data and framework which could inform and support housing targets.

Action 1 of the implementation plan is to establish land use frameworks plans for the six metropolitan regions. Amongst the broad strategies, the plans will identify precincts, activity centres, urban renewal precincts, and sites where medium and higher density housing and mixed-use developments are encouraged.

Action 19 builds on this analysis for the metropolitan regions to prepare regional housing plans to guide housing growth. These will assess the capacity to accommodate dwellings up to 2051 considering the infrastructure requirements to meet this growth. This will determine preferred locations for medium and higher-density housing.

In this respect, the Plan Melbourne implementation is slowly building a framework that could support the approach taken in Greater Sydney. While in its early stages it is an example of an active response in an Australian context where there are parallels in the affordable issues faced.

The New South Wales Government has indicated setting housing targets at the metropolitan, district, and local government area level in its strategic planning. Housing affordability was identified by the Premier with a goal of increasing home completions to 61,000 a year on average by 2020-21. Housing targets - along revised minimum lot sizes, quicker rezonings, faster greenfield land release, code assessment of medium-density housing, and use of surplus land - are part of the solution.

Boosting supply and delivering more diverse and affordable housing are identified priorities in the metropolitan Plan, A Metropolis of Three Cities. The Greater Sydney Commission, an independent planning authority funded by and reporting to the NSW Government, is charged with the delivery of strategic planning for Greater Sydney.  The Commission has prepared five district plans which set housing targets for each of these areas over a 20-year period. These are translated to targets for the local government areas. The 0-5 year targets are minimum targets and are largely reflect delivery potential under current planning controls. The 6-10 year housing targets will be developed by the local government authorities through the housing strategies to be incorporated into the local schemes.

While the targets seek to drive strategic change, the plan is to deliver the right houses in the right location focussing on demographic need, diversity of housing choice, alignment with State and local infrastructure provision, and achieving innovation in the demand for utilities.

But it isn’t development for development’s sake. A heightened level of amenity is expected to be achieved through community engagement to establish priorities on how new housing can be incorporated in a way that benefits existing and future communities. This includes recognition of the potential displacement effect on the existing community by developing an understanding of the location and amount of affordable rental housing that is available.

What Needs to be Done

Establishing housing targets will require a combination of committed political ownership and engagement with stakeholders to translate this ambition through the policy instruments of State and Local government to provide a clear signal to the market where housing is to be achieved. We are all too aware of the political fall out that occurs when local governments seek or are ‘forced’ to accommodate additional growth as the residential zones debacle earlier this decade is testimony to.

The development of the land use framework will provide a strategic understanding of Melbourne’s development and land use patterns and where underutilised locations can support increased medium and high-density housing. This strategic work will provide justification for nominating locations where increased housing can be supported by existing or proposed infrastructure and in which timeframe it can occur. This allows for the estimation of potential yields to inform the targets.

This is where the political will to drive the solution needs to be taken up at State Government level. It needs to be adopted as a transformative change in the thinking of Melbourne’s city structure. The benefits need to be communicated with the community through deep, ongoing engagement. But this engagement is framed around how the change is to occur while preserving what is valued in different areas, not as a rallying point to further enshrine privilege. These measures will also need to set in a manner that can persist in the longer term against the buffering presented by a change in government or those seeking immediate political gain.

The setting of regional targets allows for the coordination of housing with infrastructure or centres that cross municipal lines. This establishes a broader base for strategic thinking rather than sticking within the municipal bailiwick. No more putting up the figurative ‘we’re full’ sign of nominating a majority of the housing area as minimal change, dusting the hands, and leaving the task to somewhere else to deal with.

The targets are entered into the Planning Policy Framework at a municipal level. This focuses strategic planning to a heightened faciliatory role, providing a clear indication to market on where housing is encouraged and the forms expected. The community engagement allows those to be refined for local conditions and provide reassurance that valued attributes and existing communities will be carried along with the change.

The targets will be included as local policy within the Planning Policy Framework. Areas where increased housing density will be clearly identified and appropriately rezoned with controls to reflect the outcome to be achieved. Reduced third-party submission and review should be applied if proposals are consistent with the local plan developed through consultation.

Resources such as additional planning expertise should be made available to Councils to assist them with preparing or revising housing strategies including targets as well as amendment of schemes. Incentives of additional assistance could be provided for those Councils more advanced in strategic planning and willing to act on the targets in shorter timeframes.

A target is meaningless without accountable actions. At a minimum, this should involve annual reporting of the performance against the targets, detailing what types of housing has been approved and delivered, and what actions have been taken to assist delivery. The State Government should be prepared to intervene where targets are not being achieved, calling in application for types if there is a persistent failure to deliver appropriately. Conversely, incentives, such as direct grants for urban design projects or additional resources, could be provided to local government where targets are achieved.

Housing targets will require a shift in the way governments and planners view the delivery of housing but clearly the invisible hand of the market needs some assistance with the heavy lifting. 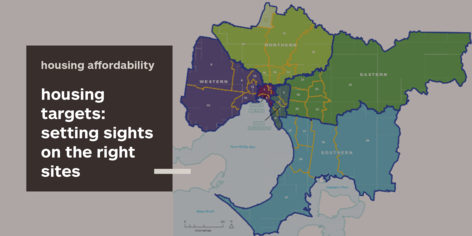