The 'Middle' - is it Missing and How Do We Make Sure it Effectively Contributes to Affordable Housing?

The missing middle has been a hot topic for some time now. If you’re in the housing and development industry, you will be aware of the pressure for our inner suburbs to do more of the heavy lifting to deliver more diverse and hence more affordable housing solutions. These infrastructure-rich locations with access to a network of transport modes, jobs, medical resources, recreational parks, schools and social facilities are the logical location for density and growth.

The Middle is made up of the suburbs located approximately within a 10-35km radius of the Melbourne CBD as shown in the map to the right.

In the middle suburbs, we see various examples of the 'Australian Dream' that met the shelter demands of a growing population post the second world war. However, these former outer city locations are seen by some as underutilised land where increased densification can lead to widespread community benefits. This includes a contribution to the affordability of housing. This is where ‘the middle’ can step up to the challenge by delivering more housing to meet the growing population’s demand.

This article looks at what the middle is not doing and why, and how it might do it better.

Are the Middle Suburbs Really Missing?

The term 'missing middle' refers to the relative lack of development in the middle ring suburbs to provide diverse and affordable housing solutions. The term is typically perceived negatively within the industry, with communities and planning schemes generally seen as limiting opportunities to allow for suitable development. Conservatives would argue that there is plenty of development going on in our middle ring suburbs, and we are doing just fine.

Statistics recently released from the Grattan Institute[1] show that the prevailing type of development in these suburbs is still backyard infill, and dual occupancy development. In our view, this piecemeal approach is just not going to cut it.

Grattan Institute’s recent research indicates that Melbourne’s largely centralised apartment development is a stark contrast to Sydney and Brisbane, which have seen high levels of apartment growth of generally between 4 and 9 storeys in the middle suburbs, particularly over the last five years. Sydney is also promoting a ‘missing link’ housing model based on a low rise medium density dwelling type (one and two storey dual occupancies, manor houses and terraces).

Sydney’s recent introduction of the Low Rise Medium Density Housing Code allows approvals to be carried out under a fast track complying development approval, to promote an alternative typology to freestanding homes and apartments. With this comes the estimated savings of up to $15,000 in building and administrative costs per dwelling.[2] But this alone is not enough to address housing affordability in the middle suburbs.

Looking overseas, much of the densification of suburbs in Europe and the US also sees developments of mid-rise scale, which is proven to foster better social networks and well-being in a community.

In Denmark and Norway, sustainability drives densification, and the unlocking of underutilised brownfield land is playing a large role in supplying for the demand.

In the US, local level governments drive policies that seek to enhance the economic integration of low-income housing. For example, within New York, the Inclusionary Housing Designated Areas program targets a 20 per cent affordable housing provision for a 33 per cent bonus in floor area. From 2005 until February 2017, the program created or preserved over 7,000 affordable housing units[3].

We are not there yet. The Victorian Government’s Homes for Victorians does include the objective of increasing development opportunities in the inner and middle suburbs (Initiative 2.3). However, this is largely on brownfield such as Fisherman’s Bend, Docklands and Arden precincts (which is currently underway). Plan Melbourne 2017-2050 includes the aspiration of providing 70 per cent of future housing within the existing developed area, but further actions on the ground are needed to drive this change.

What is slowing down the development of Melbourne’s ‘Middle’ and why is the current market so unaffordable?

This series has previously explored several solutions to increase supply and improve housing affordability, such as build-to-rent, housing targets, inclusionary zoning and uplift and density bonuses. These are solutions that can also be applied in Middle Melbourne. While these options all apply, there are 3 key road blocks that contribute to the lack of supply in the middle suburbs and housing affordability.

Planning red tape has been recognised as one of the major contributors to the rising price of houses. The Reserve Bank of Australia, in its research discussion paper, The Effect of Zoning on Housing Prices[4], found that zoning restrictions raised the average house price, relative to supply costs by 69%in Melbourne. For apartments, it represents 30%of the price.

The time and cost of obtaining planning approval limits the supply of available new homes and, in doing so, drives up prices. low approvals by Councils and other authorities continue to delay developers and drive up construction costs, which flow on to the buyer.

The effect of restrictive planning policies on housing affordability and potential solutions will be discussed further in the next article in this series, as there is much to be considered.

A key to speeding up applications for medium density housing is promoting quality design as well as proper community engagement and education. Getting the community on side will not only reduce third party objections and speed up the application process, but can remove negative stigma to dense development and potentially ‘Nimbyism’. Read further on how to shift this perception in the preceding article in this series, The Great Australian Nightmare.

Melbourne is rapidly picking up on the benefits of community consultation and education. Examples like the Nightingale[5] and Assemble Communities[6] are championing quality design and innovative processes that sees more community support.

With current new innovative development models such as these, and the push for better design outcomes, Authorities will however need to be equipped to assess the greater benefits of non-conforming designs. But delivering good design outcomes promoted by policy, and government campaigning of good design, can provide confidence in stakeholders and local communities and can help break “The Great Australian Nightmare”.

A good Government led design campaign that takes on the profile of that like a ‘quit smoking’ campaign could really change the mindset of our community.

Unlocking valuable land that is not performing can increase the densification of our middle ring suburbs and this is an area where the government can lead by example. The recently-released study, Project 30,000: Producing Social and Affordable Housing on Government Land, found there is more than 195 hectares of ‘lazy’ government land with the potential to host about 30,000 social and affordable homes. Providing this type of housing in this location, the study suggests, will deliver three simultaneous benefits: minimise the impact of spatial dislocation of low income households, reduce social housing development costs, and make more efficient use of existing government assets.

Interestingly, a recent study by the University of Melbourne has revealed that there is a predicted shortfall of 30,000 affordable homes to the forecasted 164,000 needed over the next decade.[7] Hopefully we will see Government lead affordable housing projects on each and every one of these identified sites.

There is Plenty of Collaborating to be Done

None of the initiatives presented in this article are new, but this does not make their contribution to making housing more affordable any less substantive. It's obvious that securing the confidence of the community and the developer are key factors to redefining the Middle, and that Government led collaborative development and campaigning could be a starting point.

Unlocking the missing middle is a key opportunity to increase the supply of more diverse and hence more affordable housing that will meet the needs of Victorians of all ages. 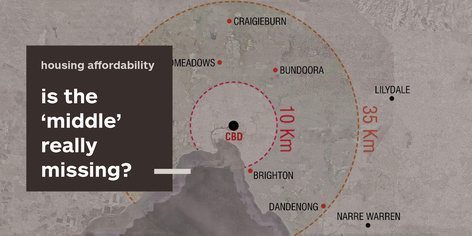 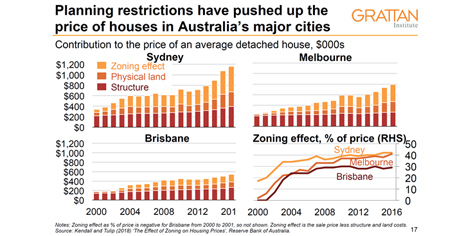