Each of our articles released over the past nine weeks on this topic has looked in depth at one (or more) of the potential causes for the housing affordability crisis and offered some solutions that we believe could assist in addressing the issue.

Given the complexity of what drives housing prices, the approach of breaking down some of the contributing factors helps to avoid becoming overwhelmed by what seems unsolvable. It's evident that there is no silver bullet when it comes to housing affordability, but there are a number of small 'steps in the right direction' which, collectively, could add up to a big difference.

With that in mind, this week’s article looks at something particularly close to home for us – restrictions and delays caused by the planning system.

Following on from last week’s article which discussed the ‘the missing middle’, we now look at some potential solutions and ways the planning process could be reformed to reduce the costs associated with these delays, which are ultimately passed on to home buyers.

Plan Melbourne has set clear targets that 70% of new housing be located in established areas. It also includes policies such as maintaining the urban growth boundary and the 20-minute city. Given the existing urban structure of Melbourne, these goals of Plan Melbourne can realistically only be achieved through the provision of a significant portion of housing within the well-serviced areas of established suburbs.

However, the application of the residential zones has almost been the inverse of what good planning would envisage, with many of Melbourne’s best serviced locations situated within the most restrictive zone. Around 85% of residential land in municipalities like Glen Eira, Bayside and Boroondara is located within the Neighbourhood Residential Zone, the most restrictive of the three residential zones. Ratio have noted the established effects of zoning on house prices in the middle ring suburbs previously.

Whilst the removal of the mandatory two dwelling maximum density provision has gone some way to alleviate the impact of the overuse of the NRZ on housing supply and affordability, other restrictions within the NRZ, particularly in instances where such land is in excellent proximity to activity centres, public transport and the like, are still having a disproportionate impact. For example, land in Boroondara along tram routes remain in the NRZ, despite all the state policy direction that would indicate a more intensive zone as being appropriate.

In addition to much of Melbourne’s best serviced residential land being placed in the NRZ, the mandatory controls on both height and garden area which have been incorporated into the General Residential Zone mean this zone is also highly restrictive.

Whilst there are no longer specific density controls in either zone, the ‘trade-off’ has resulted in the primary difference between the two (in terms of mandatory provisions) being the potential for a third storey to be allowable in the GRZ, in situations where this can be justified against the existing character. Significantly, neither zone has the flexibility to respond to different site contexts.

One suggestion to improve the opportunity for housing to be provided in these well-serviced areas is for the garden area to be a discretionary provision in the General Residential Zone. This shouldn’t be a controversial concept, as prior to 27 March 2017 the General Residential Zone (or Residential 1 Zone prior to the 2014 zone reforms) was a flexible zone which allowed a variety of built form outcomes, subject to contextual features of the site. Allowing flexibility back into this zone would allow a variation to be considered in situations where the existing character includes larger building footprints, or where a site has excellent access to public transport etc.

Of course, another potential solution, albeit one that is politically unpalatable, would be to review the implementation of the NRZ in the first place, perhaps requiring all land within 800 metres of a public transport node or activity centre to be within the GRZ (as a minimum).

Once the discretion for a performance based/site responsive approach is put back into the planning system, the next step is to look at how the approval process for medium density housing in the middle suburbs can be expedited.

One method for reducing delays in planning is a code assessment or ‘deemed to comply’ system. That is, a fast track process for proposals which are highly compliant with a certain set of standards. NSW has recently introduced a new housing code for medium density housing that does exactly that.

In Victoria, lots over either 300sqm or 500sqm are (in most cases) exempt from requiring a planning permit and, provided they comply with the key ResCode Standards which are included in the building regulations, and are able to obtain a building permit generally without any notification of neighbours.

These dwellings can have just as significant an impact on the neighbourhood character and amenity of neighbouring properties as 3 or 4 townhouses which also has high ResCode compliance. Even in areas earmarked for increased density, it is arguable that the current planning system penalises developments which are seeking to achieve a better strategic outcome as a result of third party appeal rights.

One of the main criticisms of introducing a deemed to comply system is that it results in a ‘one size fits all approach’ and encourages a tick the box system. It is arguable this is already the case, given the strong emphasis on meeting ResCode Standards at both a local government and VCAT level. An important question that needs resolution is whether the involvement of objectors will create a substantially better outcome or whether the cost (and there are many) with significant delays and uncertainty with the current system, is too great and being disproportionally felt.

To avoid this, a degree of customisation should apply, with the relevant standards for code assessment varying depending on factors such as the zoning, strategic context and intent for the location, access to public open space and public transport, such as the NSW model.

Of course, this has the potential to occur under the current system, where we see tick a box approaches to planning being approved throughout Melbourne with a mix of results.

Quality developers and architects are prepared to take on the uphill battle to pursue a design they believe in. The frustration is that, at the moment, few are getting a planning permit in a reasonable amount of time, regardless of whether they comply with ResCode or not.

Of course, longer time frames equals higher holding costs, consultants fees, uncertainty and risk. This only adds to the cost of development and, by extension, the cost of housing.

One of the many upsides to a code assess approach is that when developers have greater certainty about the planning process, they have the opportunity to allow more budget to matters like higher quality design details and of course, a reduction in sale price.

It's evident that in order to increase housing supply and diversity, and hence reduce the rising price of housing, the missing middle needs to contribute more. Reviewing the restrictive application of the NRZ, amending the mandatory nature of Garden Area as well as the introduction of a Code Assess approach to smaller medium housing developments is one way to increase housing affordability. 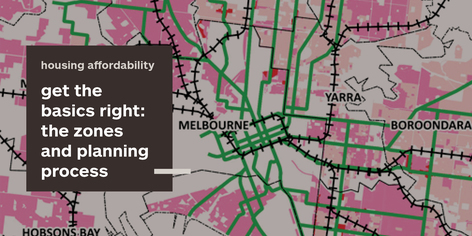