As the fastest growing region in Victoria, Geelong has experienced significant growth in housing and jobs and is well poised to continue this trend over the coming decades.

To manage and direct the scale and nature of this growth, the Draft Central Geelong Framework Plan (“Draft Framework”) and draft Amendment to the Greater Geelong Planning Scheme are presently open for exhibition. Submissions can be made to the Department of Environment, Land, Water and Planning (DELWP) until 7 July 2021.

Together the Draft Framework and Draft Amendment seek to provide greater certainty and direction around the preferred land use outcomes, built form character and other planning requirements throughout the Geelong CBD and surrounding areas (as pictured on right).

This much needed strategic process has been called upon as it has been identified that over recent years the outdated and / or absence of planning controls in Central Geelong has resulted in detrimental impacts to Central Geelong’s amenity and the public realm by way of overshadowing key areas; built form impacts to existing character and heritage; uncertainty around building heights; exacerbating wind impacts; and development which impacts on viewlines to the bay.

Prepared by DELWP, the Draft Amendment to the ACZ1 (known as Amendment C431GGEE) effectively seeks to introduce new and / or modified built form and land use guidance that will shape the future urban form of Central Geelong.  In many instances these controls are ‘enabling’, and in other instances they may be more stringent than the previous ACZ1 (pre interim controls), predominately achieved through including preferred building heights and (mandatory) overshadowing requirements.

In a general sense, there has been a broad reduction in the preferred building heights within the core areas of Central Geelong, whilst the heights on the periphery of the expanded ACZ1 allow more development intensity.  In addition, there are a number of unique sites which have been identified (Council owned land and/or very large privately owned sites) which will include floor area ratio (FAR) controls to dictate density outcomes.

One particularly restrictive element of the proposed ACZ1 controls is the overshadowing requirements to key public areas (existing or future open spaces or streets / laneways) which are to be measured at the Winter solstice, and take precedence over the preferred maximum building height requirements. This can have significant implications on the allowable building height able to be achieved on many sites. These overshadowing controls were implemented in January this year as an “interim” control, however have now been confirmed as forming part of the proposed future ACZ1 requirements.

The Minister for Planning has referred the Draft Structure Plan and Draft Amendment to an independent Central Geelong Framework Plan Advisory Committee, where a public hearing is due to commence the week of 6 September 2021.  The Committee is to review and independently scrutinise the draft and proposed planning controls and provide the Minister with advice on its merits.  The ultimate decision rests with the Minister as to whether to approve the Draft Amendment, and in what form.

Should you have any current landholdings or upcoming projects that may be affected by the Draft Central Geelong Framework, or if you wish to better understand the potential implications on your land, please get in touch with Robbie McKenzie (Director) or Grant Logan (Associate). 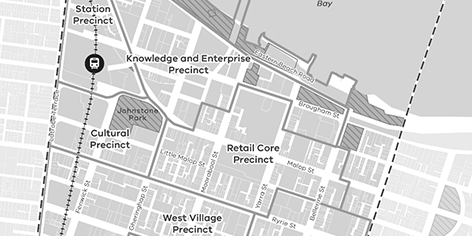