In a similar vein to the topic explored in our previous article on Inclusionary Zoning, the Density Bonus model (also known as Floor Area Uplift) seeks to leverage off new development to provide community benefit (such as affordable housing).

In contrast to inclusionary zoning where the requirement is mandatory, the density bonus schemes adopt the carrot approach - encouraging developers to include affordable housing in exchange for increased building height and/or floor area.

Currently, it is not uncommon for a developer to propose an element of community benefit (which may include affordable housing) where they are seeking to exceed a preferred height or vary other requirements. This is part and parcel of the informal planning permit negotiation process and operates as a response to Clause 71.02-3 (Integrated Decision Making), which requires that planning decision makers “…balance the conflicting objectives in favour of net community benefit and sustainable development for the benefit of present and future generations”.

Whilst informal density bonus negotiations are already well established, it has been challenging for Victorian Councils to include specific density bonus provisions tied to affordable housing within planning controls and policies with the Planning and Environment Act 1987 (the Act) being silent on the role of the planning system in delivering affordable housing.

This has been recently rectified with the amendments to the Act in June 2018 confirming the following (see here):

In addition, the Department of Environment, Land, Water and Planning (DELWP) have published guidance documents (including example Section 173 Agreement) to assist Councils in negotiating for affordable housing within new developments[1]. This is supported by a $500,000 pool established by the State Government which can be accessed by local councils to obtain professional advice and support in this area[2].

Interestingly, Victoria’s first formal density bonus scheme came in November 2016, prior to the changes to the Act via City of Melbourne Amendment C270. A density bonus (referred to as Floor Area Uplift within the Melbourne Planning Scheme) is now permitted for sites within Capital City Zones 1, 2 and 3 which are also covered by Design and Development Overlay 10.

Social housing is specified as one of five public benefits which can be ‘traded’ for an increased floor area ratio, with the density bonus (uplift allowance) calculated at 10% of the gross realisation value per square metre[3]. The West Melbourne Structure Plan suggests that a similar approach will be adopted for that area.

Hot off the press are the new Fishermans Bend planning controls which include affordable housing provisions within Clause 22.15 of the Port Phillip Planning Scheme and Clause 22.27 of the Melbourne Planning Scheme. Within Fishermans Bend there is a discretionary requirement that 6% of housing be affordable (as defined in the Planning & Environment Act) with policy wording making it clear that whist discretionary, this is very much an expectation for development within this area. In addition, the (otherwise mandatory) dwelling densities of each precinct, which are specified in the zone controls can be exceeded with eight additional private dwellings permitted for each social housing unit provided. There is no other mechanism by which to exceed the dwelling density.

In NSW, density bonus schemes to deliver affordable rental housing have been in operation since 2005 but have delivered just 1,287 units (between 0.5–1% of Sydney’s housing supply in 2009–17). The benefit is further stymied by the requirement that these units only remain affordable for a minimum of 10 years[4].

San Francisco’s Affordable Housing Bonus Program (AHBP) came into effect in 2017 and provides for a density bonus of up to 35% where a development designates 20% of units as permanent affordable rental housing. The Program also allows for planning concessions such as variations to building setbacks or parking requirements[5], and is anticipated to generate 5,000 affordable homes over the next two decades.

The San Francisco example highlights the importance of a scheme that, whilst discretionary, is explicit in terms of what it is trying to achieve, the circumstances under which a bonus may be granted, and the quantum of the bonus.

For additional information the Australian Housing and Urban Research Institute[6] notes other examples of varying scales and qualities of attempts within the country (including: South Australia, Western Australia and NSW).

Discretionary planning controls are essential to the implementation of a density bonus scheme for affordable housing - it requires a degree of flexibility to allow the decision maker to consider a number of potential built form outcomes depending on the quantum of the 'benefit' offered.

A density bonus scheme will most likely be implemented on a Council-by-Council basis with locations such as such as activity centres, commercial zones, mixed-use zones and high-end infrastructure areas being, on face value, suitable candidates. There will however be some areas which are subject to specific sensitives (such as heritage, character and amenity considerations) and are therefore unable to absorb the additional density that would be permitted under the density bonus scheme.

The opportunity for a density bonus could only feasibly be applied in area that has limited sensitive interfaces (i.e. competing objectives) with the areas mentioned above most likely. As an example, Council could introduce a Design and Development Overlay (DDO), which let’s say includes a discretionary height control of five storeys and a mandatory height control of eight storeys in a Commercial 1 Zone (C1Z). This may have been established by a local government’s strategic planning/urban design unit responding to a Character Study, which determined that eight storeys in height was an appropriate outcome for the area.

The density bonus could then be applied for the additional 3 storeys as a trade-off for affordable housing being implemented within the end-product. The policy must explicitly state that the additional storeys (bonus) can only be applied for which directly results in affordable housing. This methodology would therefore not negate the outstanding built form character intention for the area as the ability to increase the overall height would have been written into the policy.

Clearly there are going to be nuances in the specific design of the scheme which will impact the short and long-term results of any program, but clearly now would be the time to strike, while the property iron is hot. This is supported by the Australian Housing and Urban Research Institute comment on the effectiveness of density bonuses (footnote 6):

…planning incentives for new affordable housing are particularly effective within high value markets where development opportunities are limited. Such housing could range from low cost market housing to subsidised social housing supply. In these scenarios, planning incentives that create additional development potential, such as graduated planning standards and planning bonuses or concessions, are likely to be very effective provided there is a degree of development activity within the area (p. 115).

Whilst the work undertaken by City of Melbourne to facilitate their density bonus program will be of great assistance to other Councils interested in a similar scheme, an effective program will need to be tailored to each area considering the local need, value of uplift, and externalities which will influence the scale of ‘bonus’ available.

Inclusionary Zoning or Density Bonus - Why Not Both?

Our article on inclusionary zoning highlighted the benefits associated with adopting mandatory controls for affordable housing. Whilst there is a very real opportunity offered by this approach, the depth of the housing affordability crisis and complexity of our built environment requires multiple and diverse solutions.

While inclusionary zoning is suitable for areas undergoing rezoning or following major infrastructure investment where there is a significant land value uplift, density bonus schemes capture the localised (site by site) value uplift which is inherent in the granting of a permit. Therefore this approach is more suitably incorporated in smaller areas which are subject to an established planning framework.

State Government leadership is essential if Victoria is to develop density bonus schemes that make a meaningful contribution to affordable housing. For example, a state-led program could be tasked with identifying and assessing potential areas for density bonus schemes, and making recommendations to councils and the Minister as to how such a scheme could be structured. This would be ensure a proactive approach which ensures that land in municipalities which may not have the resources or will to implement density bonusing are not overlooked.

In this case, it is not a matter of solely choosing one option; the more solutions, the better the likelihood of success.

The voluntary choice to provide for affordable housing within developments needs to be appropriately balanced against the competing policy objectives, but this can be achieved. This may not happen without some trial and error; however, this shouldn’t deter policy makers nor the development community from what appears to be a practical solution to address a contemporary and tangible issue.

The State Government has taken the first step in the affordable housing saga, in revisions to the Act, and a continued effort in the form of tangible policy reform and execution of strategy will ensure the longevity of any such approach. 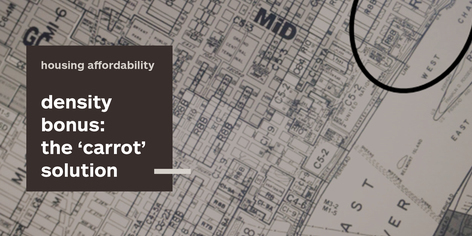 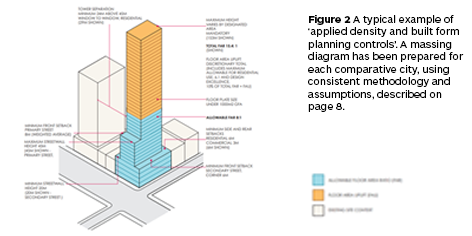