Australia’s dependence on private vehicles originated largely due to the often-large distances between destinations, at a time when reliable alternate means of transport were few and far between. This is no more prevalent than in our major cities and town centres where often the largest pieces of infrastructure relate to roads and the provision of car parking.

As the country has grown and developed, other means of transport (train, tram, bus, cycling, walking) have come into play, offering options that either provide similar or improved transport opportunities for some journeys to those offered by private vehicles. However, a reliance on private vehicles remains as the intrinsic starting point for any conversations regarding transport and future development. Recognised as the most unsustainable means of transport, consideration needs to be given to lessening the reliance on private vehicle use with improved sustainable travel opportunities.

Whilst a shift in travel mode priorities has long been recognised as a key element in the creation of sustainable cities, development controls and planning policies have largely been aligned towards how best to address the impact from private vehicles.

The City of Melbourne earlier this month published their much-anticipated draft Transport Strategy for 2030 which aims to guide the future of transport both to and within in the Melbourne CBD. The Strategy was released following an extensive community consultation period during which time eight discussion topics were released inviting public comment and input. ratio: welcomed this opportunity and was proactive in the process. The topics included walking, city space, emerging technology, cycling, public transport, motor vehicles, car parking, and transport pricing, and the consultation process elicited almost 1,300 responses. These responses were considered within the further documentation and preparation of the draft Strategy.

The Strategy preparation identified a number of critical matters in relation to existing transport and travel trends within the Melbourne CBD. Of note:

There is a strong trend in the City of Melbourne heading for reduced car ownership and an increase in the use of alternative and more sustainable means of transport. This trend supports a primary focus of the draft Strategy of working towards a liveable future where private vehicle use in the CBD is discouraged, with alternative sustainable means of transport (public transport, cycling and walking) promoted.

One of the more publicised goals of the Strategy is to repurpose the equivalent of 20 Bourke Street Mall's worth of public road space and car parking spaces. The governing purpose behind this goal is to reduce through vehicle movements in the CBD and to create opportunities for improved pedestrian and cyclist facilities. In conjunction, activation of additional open space within the CBD would also be used to facilitate the provision of additional green space as well as opportunities for on-street trading and dining.

Discussions are presently underway regarding potential modifications to Elizabeth Street, which if approved, would be rolled out over the next six years and would include the removal of trafficable lanes between La Trobe Street/Lt Lonsdale Street and also Lt Bourke Street/Bourke Street along with other reductions to southbound traffic flows.

Other initiatives also being considered to both revitalise existing spaces within the CBD and change transport trends include reductions in speed limits throughout the CBD, and the repurposing of car parking areas to provide new community spaces and facilities.

It is encouraging to see that the Strategy aims to make significant improvements to the cycling network throughout the City of Melbourne. These improvements include expanding the network of protected on-road bicycle lanes from around 6km to 50km by 2030 and working with the Victorian Government to trial innovative intersection designs at key intersections to improve safety and provide priority to cyclists. Many individuals have concerns about cycling due to the danger from vehicles on the road and the threat of being doored by parked vehicles. The initiatives contemplated within the Strategy will assist in creating an environment for cyclists to travel safely and in greater comfort.

In regard to the impact on the land use planning space, implementation of the changes identified in the draft Strategy will assist in the delivery of developments with decreased reliance on private vehicle use. The City of Melbourne is not alone in this approach, with other municipalities (such as the City of Moreland) having recently released similar transport strategies that look to prioritise alternate modes of transport over private vehicle use in key locations.

ratio: believes that the delivery of the draft Transport Strategy by the City of Melbourne is a step in the right direction regarding the delivery of a transport system that responds to the future growth and needs of the CBD. ratio: has been a long-standing advocate of liveable futures and is heartened by the significant work that has been undertaken by the City of Melbourne in the creation of the draft Transport Strategy.

If you would like to read more about the City of Melbourne draft Transport Strategy and/or make a submission, please follow the link below (noting that the consultation period close on Wednesday 19 June 2019):

Should you have any queries regarding how you can best incorporate these considerations within your development, including the preparation and use of Green Travel Plans, please get in touch with us. 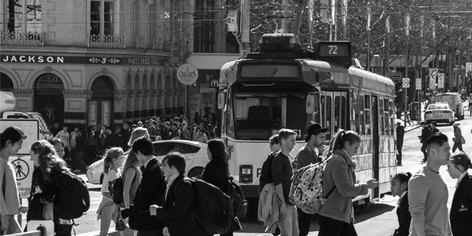