Readers may recall that the City of Monash prepared this Amendment some time ago to introduce the ‘Monash Housing Strategy 2014’ as a reference document into the planning scheme, and to update the LPPF/zone provisions to reflect its inclusion and recommendations.

The Amendment essentially sought to roll-out the new residential zones (as they were at the time), but was notable for including vast areas in the Wheelers Hill region in the Neighbourhood Residential Zone, and introducing a myriad of onerous provisions in the schedules to the various proposed residential zones which (in our opinion) lacked strategic rigour and justification.

The Amendment underwent public exhibition and was assessed by an Independent Planning Panel, which was critical of some of its aspects. After various ‘toing and froing’ between the Minister for Planning and the Council, the Minister split the Amendment into two parts as follows:

At a Council Meeting held in March 2018, Council resolved to resubmit Part 2 of the Amendment to the Minister for approval, without undertaking the recommended changes or further studies.

We understand that the ‘sticking point’ with the Minister was that the proposed roll-out of the General Residential Zone did not take into account the location and distribution of what is referred to as ‘accessible areas’ and ‘boulevards’ in the Housing Strategy.  These are areas that are near activity centres or major roads (being Springvale Road and Dandenong Road/Princes Highway), with the intent being that these areas are suitable for higher intensity housing, potentially including apartments.

At its meeting on 26th February 2019, the Council resolved to refer Part 2 back to the Minister for approval excluding the land identified as ‘accessible areas’ or ‘boulevards’. These areas are proposed to be the subject of further assessment and a separate Amendment process. In the interim, they will remain in the current ‘Schedule 2’ of the General Residential Zone (which is reasonable given it has limited variations in its schedule).

Most other GRZ land (although not land included in the ‘Monash National Employment and Innovation Cluster’) will go into a new ‘schedule 3’ of the zone and be approved as part of Amendment C125 (part 2).

However, the devil is often in the detail and we noted that the areas proposed to be included in the ‘accessible areas’ or ‘boulevards’ are (for the most part) substantially less than the areas nominated as same under the Housing Strategy – as we have identified (refer to the image).

As we understand, there was no public consultation with respect to how these areas were defined.  Whilst there may be an opportunity to adjust the areas when a separate Amendment is prepared (and hopefully exhibited) for the ‘accessible areas’ and ‘boulevards’, it is always harder to do this retrospectively.

The preferable outcome would have been to give the public some say in this through formal re-exhibition – as previously foreshadowed by the Minister.

There is also some uncertainty as to what will happen with the GRZ land within the ‘Monash National Employment and Innovation Cluster’, which was variously proposed to be included in a new ‘Schedule 6’ to the GRZ.

People with residential land in the City of Monash are encouraged to review the details of the Council’s most recently adopted position and It may be appropriate to write to the Minister expressing concerns if any.

ratio: would be pleased to assist you in this regard or to discuss this article further. 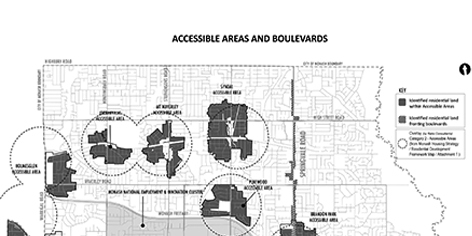 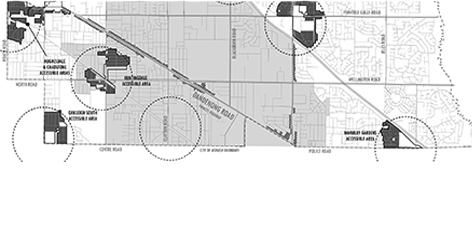