Current Projects Around the City of Melbourne

As Melbourne was lifting out of the first wave of COVID-19 restrictions in June, we learned that the City of Melbourne, as part of the Priority Reactivation and Recovery Plan, had fast-tracked 40km of cycle lanes. The delivery of these new facilities is underway, with an estimated 500 metres of cycle lanes delivered per week. This is an exciting prospect for residents, employees and visitors of the CBD who may have previously been too nervous to consider cycling into or around the city.

Another key feature of the Priority Reactivation and Recovery Plan is the allocation of on-street car parking bays for outdoor dining to increase capacity for local cafes and restaurants. Ratio is at the forefront of providing integrated urban design/planning/transport expertise towards the active facilitation of this exciting opportunity across the urban area of Melbourne and has already conducted a case study of how on-street dining could be delivered for Swan Street café’s and restaurants in Richmond.

The ‘Little Streets‘, which hold an iconic place value in Melbourne, have also had a recent facelift. Flinders Lane, Little Collins Street, Little Bourke Street and Little Lonsdale Street have all been converted into shared zones with a 20km/h speed limit. Within shared zones, priority is given to the most vulnerable road users, which in this instance is pedestrians. Vehicles are still able to use these streets for access but must adhere to the new speed limit and priority rules.

These measures provide more flexibility and mobility for pedestrians and cyclists within the Hoddle Grid. As the current restrictions are likely to ease in the coming weeks, it is very likely that more residents, employees and visitors to the city will opt to walk or cycle in order to maintain desired social distancing requirements and stay safe whilst travelling.

Traffic Issues in the City

One constant barrier for pedestrians and cyclists in the city is the potential conflict with vehicular traffic. As outlined in the Melbourne 2030 Transport Strategy, during pre-Covid conditions, through traffic accounted for approximately 43% of daily vehicle movements within the Hoddle Grid. The strategy aims to halve the percentage of through traffic by 2030. To do so, it aims to increase public transport, walking and cycling mode share to 70 per cent of all trips, as well as increase the proportion of women cycling to 40 per cent.

The key to delivering these targets includes a rethink in the way road space is prioritised. Currently, the majority of the road reserve is allocated to vehicular traffic, which accounts for less than half of all trips taken by mode share within the Hoddle Grid. There is an opportunity to redistribute through traffic into and around the city and to reallocate the road space to more productive and efficient uses.

In 2017, City Planners and Engineers in the city of Ghent in Belgium gave the street network a massive shake-up by removing vehicular traffic along key routes within the town centre by implementing a ‘circulation plan’. A circulation plan determines how different people and goods can move safely and efficiently to, from and within a defined area. A key feature of circulation plans is the separation of modes of transport. Road blockage or truncations are often used at strategic locations to prevent passenger vehicles from using that road as a route through the centre of the city whilst allowing pedestrians, cyclists and service vehicles to continue through. Priority for passenger vehicles can then be enhanced on peripheral roads to allow drivers to circulate around the city centre and encourage a significant shift to other modes of transport, in particular the bicycle.

The response to COVID-19 has demonstrated that we can achieve things that were previously considered pipe dreams. We just need to prioritise them and take action. The timing is right for the City of Melbourne and neighbouring Councils to embrace this unique opportunity to adopt ‘circulation plans’ to remove through traffic from key roads within the Melbourne CBD. In doing so we can prioritise walking, cycling and public transport usage and also reduce the associated demand for kerbside parking to provide extra space to on-street dining, footpath widening and landscaping opportunities. The beauty of circulation plans is that the physical infrastructure required is flexible and can be implemented in stages, from temporary to more permanent structures once they have proven to be successful. 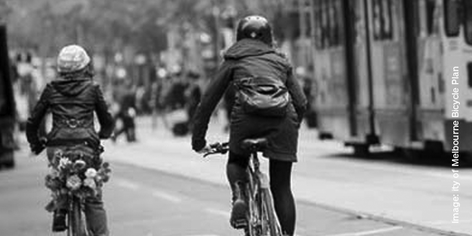