After over 4 years in the pipeline, Amendment C126 of the Bayside Planning Scheme was reviewed by an independent Panel late last year with the Panel Report being issued at the end of last month. Whilst the Panel was supportive of the need for the Amendment and the introduction of built form controls for the identified centres, it was critical of the drafting of the Amendment and recommended 64 changes, including the removal of mandatory height controls.

At a Council Meeting held last week, Bayside Council resolved to adopt the recommendations of the Panel including the removal of proposed mandatory height limits. However, this position may be short-lived with Bayside Council stating their intentions to undertake further strategic work to justify the application of mandatory heights.

The Amendment has a long history, initially being exhibited in March-April 2017 and re-exhibited in June-July 2018. It seeks to implement the findings of the Bayside Small Activity Centres Strategy 2014 and other strategic work that was undertaken to support the Amendment.

Thirty-three small activity centres have been identified by the Council and includes centres such as Bluff Rd/Bay Rd, Sandringham, Dendy Village, Brighton and Balcombe Park, Beaumaris. The Amendment seeks to provide guidance on the function, role and appropriate built form for each of these centres that were previously not subjected to any comprehensive strategic work.

The Council have sought several zones and overlay changes for each of the nominated centres including the introduction of five new schedules to the Design and Development Overlay. Whilst most of the nominated centres will retain their Commercial 1 zoning, there are six centres that will be rezoned from Mixed Use to Commercial 1. All centres[1] will be subject to one of the newly introduced schedules to the DDO.

Most of the identified centres have a mandatory maximum height limit of between 9m (2 storeys) and 11m (3 storeys). The exceptions being those centres falling under the category of ‘highway oriented’ and being affected by DDO15 and the South Road and Esplanade Avenue, Brighton centre which was given a post-exhibition change to new DDO19 which provides for maximum building heights in different precincts within the centre. Under these two schedules to the DDO, there is a preferred building height of 13.5m (4 storeys) and mandatory maximum heights ranging between 9m (2 storeys) and 16m (5 storeys) respectively.

All centres seek side and rear setbacks to be in accordance with ResCode B17 when abutting residentially zoned land and the provision of active street frontages.

The most controversial aspect of the Amendment was the content of the proposed DDO schedules, many of which proposed mandatory maximum building heights. The Council have previously been criticised for their blanket use of mandatory controls which is contrary to the guidelines provided in Practice Note 59 on the use of mandatory controls only in exceptional circumstances. This amendment was no exception and the Panel was critical of the application of mandatory controls, stating that they were not strategically justified for the nominated centres whilst also recognising that the argument for mandatory provisions is somewhat stronger in the case of small activity centres, especially where they interface directly with land in the NRZ with current 2 storey height limits. Overall the Panel was in agreement that the proposed heights were generally acceptable, and should these heights have been expressed as discretionary preferred heights, the Panel may have been in full support of these built form outcomes.

Given that all substantive works would require a planning permit under the relevant DDO schedules, even with preferred heights, all proposed heights would need to be justified in terms of site analysis and design response in the context of the new DDO schedule. There would be circumstances where the preferred height or building setback can be altered but still meets the overall built form outcomes due to site context and this would be a performance-based assessment.

The Panel agreed with the use of mandatory controls in some centres, stating that ‘ultimately, the main scenarios it has identified for the Amendment as strategically justifying mandatory controls are direct coastal sensitivity or the heritage significance of adjacent properties’ but also noting that it is not essential for a threshold as high as “extraordinary circumstances” in every case to apply to justify mandatory provisions.

The Council’s adoption of the recommendations for the preferred height (which will be forwarded to the Minister) enables them to ensure that the centres have some form of height control while they undertake a further study to support the application of mandatory height controls in those centres where they were not supported by the Panel (i.e. 27 number of centres!). The Council is fearful that without mandatory height controls in these centres which abut residentially zoned land, it will be open slather for developers to seek buildings with excessive heights.

We welcome the recommendations to remove the mandatory height controls in these centres, enabling a merit-based assessment for applications. Given the heavy- handed application of the NRZ throughout Bayside Council, these centres have a role to play in contributing to urban consolidation including the provision of higher density housing which is only made possible by increased heights.

It is anticipated that the further strategic work on the provision of mandatory height controls will be put forward as a separate amendment for the Council to consider later this year.

Click here to view locations of Activity Centres in Bayside 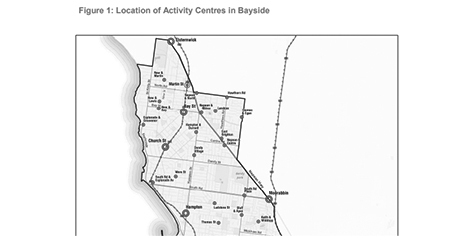