A driver on Victoria’s country roads is four times more likely to be killed than a driver in a metropolitan area, especially on roads with posted speed limits of 100 and 110 kilometres per hour. A quarter of these accidents are due to head-on collisions.

To combat these statistics VicRoads has partnered with Transport Accident Commission (TAC) to transform Victoria’s highest risk roads into some of the state's safest. The partnership has dedicated $1 billion over 10 years through the Safer System Roads Infrastructure Program (SSRIP) by upgrading and improving intersections, installing flexible barriers and, in some areas, installing Wide Centre Line Treatments (WCLT's).

WCLT's have been championed in Queensland, with positive results achieved in reducing cross centre line crashes. Now being adopted by VicRoads, WCLT’s provide an effective and alternate treatment to the traditional options of physical medians and median crash barriers systems.

WCLT's introduce a greater separation between standard centre road line marking of at least 1.0 meter, encouraging greater separation of opposing traffic stream. It also provides additional time to react to avoid head-on collisions if drivers stray over the centre line. Treatments are typically retrofitted within existing road carriageways without the need for additional road widening. Standard line marking types are used allowing drivers to perform overtaking maneuvers and access to properties where it is safe to do so.

Utilised in high speed environments of 90km/h and above, together with Audio Tactile Line Marking (ATLM), WCLT have demonstrated a substantial reduction in the number of crashes on higher volume two-lane rural roads. With the SSRIP supporting the TAC Towards Zero initiative, VicRoads has imminent plans to install WCLT’s along some of the state’s worst accident prone highways e.g. Paynesville Road, Calder Highway, Gippsland Highway and even along sections of the Great Ocean Road.

Overall, the recorded benefits achieved from Wide Centre Line Treatments have been substantial, with an 80% reduction in head-on-crashes and 60% reduction in total crashes (Austroads, 2016). These figures are impressive given the relative ease and low cost of installation and the minimal ongoing maintenance required compared to traditional treatment options. We welcome the adoption of WCLT’s by VicRoads as part of the road safety toolkit. 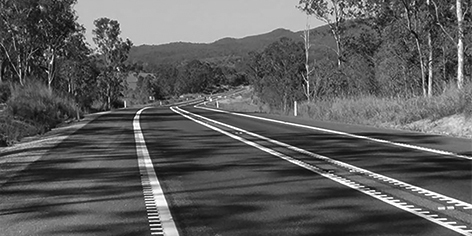