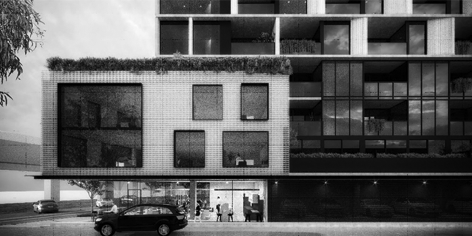 An exciting redevelopment of a site located in the Carnegie Activity Centre. Ratio was requested to provide an urban design statement in support of the proposed residential development of 13 storeys, on land covered by a Development and Design Overlay which has a preferred building height of seven storeys.

The history of this project involves two VCAT hearings, with the Tribunal ultimately refusing proposals higher than the current scheme, with podium car parking. At the time of the previous application, the Skyrail (elevated Cranbourne-Pakenham rail line) was proposed and the previous proposal’s response to this interface formed one of the grounds for refusal.

The new design not only responds to the Tribunal’s previous decisions, it inserts a well-articulated built form of exceptional quality to the evolving Egan Street environment, that sensitively introduces new height to the Dandenong Road Precinct.

This project delivers on several primary urban design principles. The rapid growth of the Carnegie Activity Centre, and the introduction of new public spaces triggered by the Skyrail and redeveloped Carnegie Station, provides a vibrant and active environment for the new scale envisioned for the Dandenong Road precinct. The proposed design captures the aspiring character of the growing activity centre and focuses on passive surveillance, activation of the public realm and the delivery of high density residential development in line with current policy.

The new design provides a large commercial component of 1,206 sq.m which activates Egan Street and encourages jobs and businesses to the area. The bulk of the car parking is provided in basement levels, with no podium car parking proposed. In addition, a pedestrian link to the west boundary is introduced to align with the Carnegie Structure Plan, and the building is set back on all levels from each side and rear boundary to promote permeability and equitable development of adjacent sites.

Located at key transportation corridors, (the major arterial Dandenong Road and the Cranbourne-Pakenham train line), and within the evolving Carnegie Activity Centre, it was critical that the proposal not addressed the housing needs of our escalating population, but did so in a sensitive way that responds to the evolving context.  8 Egan Street is an exceptional example of the type of development that challenges preferred building height overlays in this manner.